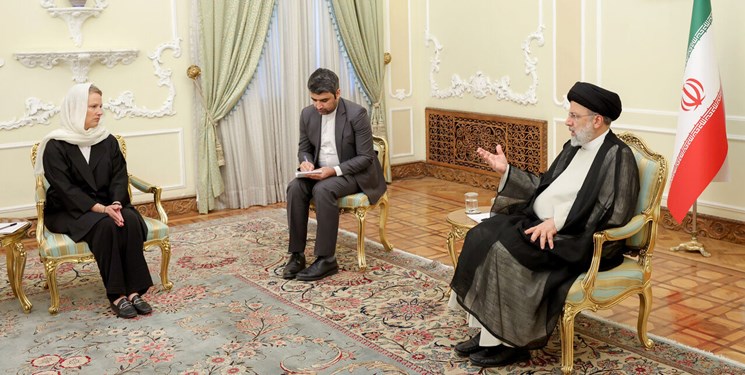 TEHRAN (FNA)- Iranian President Seyed Ebrahim Rayeesi lashed out at the US and its European allies for their “irresponsible” move against Iran at the International Atomic Energy Agency (IAEA) Board of Governors.

President Rayeesi made the remarks in a meeting with new Swiss Ambassador to Tehran Nadine Olivieri Lozano on Monday.

He referred to the recent anti-Iran resolution adopted by the IAEA’s Board of Governors, which was drafted by the US and its European allies, and said the measure “taken while the negotiations were underway to reach an agreement (on the revival of the 2015 deal) was irresponsible and violated the spirit of the talks and agreement, and exposed the conflict in their approach (to Iran)”.

“The US must make a decision to abide by the requirements of the negotiations and the agreement,” Rayeesi said.

He pointed to "miscalculations" of the US and Europe about Iran, and expressed the hope that the new Swiss envoy would convey the existing realities in Iran to Switzerland and other countries so that they would understand that Tehran has managed to make progress despite hostile approaches and that their arrogant policies have backfired.

Rayeesi also stressed Iran’s readiness to boost trade, economic and political relations with all countries to a maximum level, including Switzerland.

The IAEA's Board of Governors adopted the resolution on June 8, accusing Iran of not cooperating with the agency. The resolution was approved with 30 votes in favor, two against and three abstentions.

It came as Iran and the five remaining parties to the multilateral deal, officially known as the Joint Comprehensive Plan of Action (JCPOA), have held several rounds of negotiations in the Austrian capital of Vienna since April last year to restore the agreement, which was unilaterally abandoned by former US President Donald Trump in May 2018.

Iranian Foreign Minister Hossein Amir Abdollahian said on Friday that the JCPOA revival talks can succeed if the US acts realistically and provides Tehran with robust guarantees that it will be able to fully reap the economic benefits of the deal.