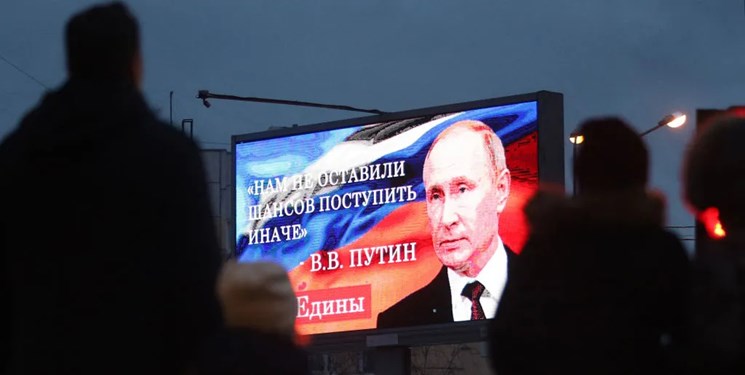 TEHRAN (FNA)- Russia is seeking to make the facts about atrocities being committed by the Kiev regime in Ukraine available to the public, yet the West is doing its best to block media from publishing unbiased reports, Russian Foreign Minister Sergey Lavrov said following talks with his Mongolian counterpart, Battsetseg Batmunkh.

"We are seeking to make the facts about atrocities the Kiev regime has been committing in Ukraine available to the public. Unfortunately, the West has been doing its best to stifle media that has been publishing unbiased reports about the situation there," Russia’s top diplomat stated at a news conference, TASS reported.

Lavrov described as one of the most dangerous the policy the West had been running for years to transform Ukraine into "an overtly Russophobic, neo-Nazi country in order to have a military foothold" for posing security threats to Russia.

On February 24, Russian President Vladimir Putin launched a special military operation in response to a request for help from the leaders of the two Donbass republics. The Russian leader stressed that Moscow had no plans to occupy Ukraine, but that the goal was to demilitarize and denazify the country.

"As for plans to strengthen cooperation with Latin America amid policies adopted by our Western colleagues, we have long-drawn conclusions for ourselves. The West, in fact, has cut all ties with our country, graciously allowing us to maintain some economic relations, in which it is interested itself," Lavrov pointed out.

"We will boost political, economic, defense and cultural ties with any country that is willing to do it based on equality and mutual benefit. The West is not ready for that. The vast majority of Latin American and Caribbean countries are interested in developing relations with us, so we will respond in kind," the Russian top diplomat continued.

Lavrov added that "Russia will not deliberately harm its own interests, but it has long come to the conclusion that the West is unreliable and unable to make agreements".

Russia did not start the "war against journalists" and is interested in ending it but the West cannot stop its aggression against media outlets, Lavrov said.

"We did not launch this war against journalists. We are interested in ending it yet I do not see how the West can stop its excesses since it has gone too far and now it is impossible for it to stop without losing face," the Russian top diplomat stated.

He emphasized that the obnoxious attitude towards Russian reporters abroad, particularly in the US, the EU and Ukraine had reached such proportions that it cannot be tolerated anymore.

"The West stopped paying attention to [international] law, to put it mildly, is violating it left and right making up its own rules. Its rules say that the European Union will decide on its own what constitutes the freedom of information and what is propaganda," the Russian foreign minister noted.

In this context, he reiterated that French President Emmanuel Macron in response to a question as to why RT and Sputnik don’t have accreditation at the Elysee Palace, asserted that "these are not media outlets but propaganda tools".

"There are numerous examples like this," the top diplomat stressed.