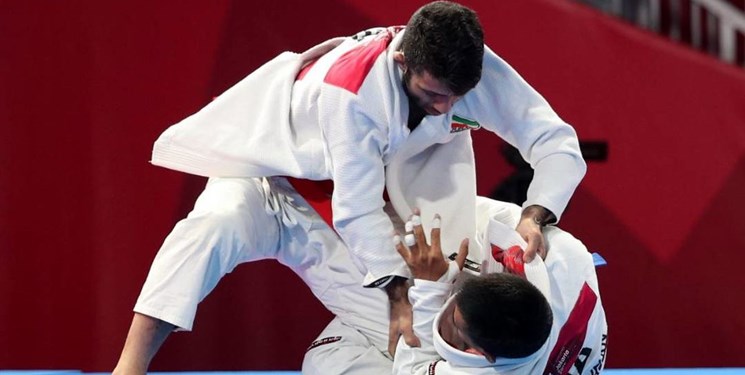 TEHRAN (FNA)- An Iranian athlete snubbed an Israeli counterpart at AJP Tour Fujairah International Pro Jiu-Jitsu Championship in the UAE, in a move to show solidarity with the Palestinian people and hit a blow to the occupying Zionist regime’s status in the world.

Hamid Amrayee was initially scheduled to take on an opponent from Brazil in the men’s 77-kilogram weight class, but officials changed the draw and set him on course for a showdown against an Israeli competitor.

The Iranian sportsman and the national team’s technical staff strongly objected to the decision, and Amerayee finally announced his resignation from the international tournament.

The move is seen as a new snub for the regime following similar measures taken by a host of Muslim players from across the Islamic world.

Also, in May, a Kuwaiti wheelchair fencer withdrew from the second International Wheelchair and Amputee Sports Federation (IWAS) World Cup of 2022 in Thailand over a draw placed her for a match-up against an Israeli opponent.

“Kuwaiti player Kholoud al-Mutairi pulled out of the International Wheelchair and Amputee Sports Federation (IWAS) World Cup in Thailand in order not to compete against a contestant from the Zionist entity,” the Kuwait Paralympic Committee wrote in a post published on its Twitter page.

A month earlier, another Kuwaiti fencer Mohamed al-Fadli had withdrawn from the World Fencing Championships held in the UAE for the same reason

Fadli also withdrew from an international tournament in the Dutch capital, Amsterdam, in September 2019, after the draw placed him in a group competing with an Israeli player.

Meantime, in May, Kuwaiti chess player Bader al-Hajri snubbed an Israeli opponent at Spain’s Sunway International Chess Championship, in an act of solidarity with the Palestinian people and a blow to the occupying Tel Aviv regime’s status in the world.

The Fédération Internationale des Échecs (FIDE) master, who had secured first place at the 2015 San Sebastian chess tournament in Spain, withdrew on May 3 from the competitions to refuse to face an Israeli competitor.

On social media, Arab activists lauded al-Hajri as a champion of “rejecting Arab countries’ normalization” with the Israeli regime by refusing to face “an Israeli settler.”

The activist said they are “proud of him” while noting that the Israelis must be “mad at him”.

Lebanon's Abdullah Miniato also withdrew from the international mixed martial arts (MMA) competition in Sophia, Bulgaria to avoid a match against an Israeli opponent, following the lead of two African athletes who refused to fight their Israeli rivals at the Tokyo 2020 Summer Olympic Games.

The young Lebanese fighter and his coach, Muhammad al-Gharbi, announced the withdrawal from the sports event after the draw placed Miniato against an Israeli athlete.

In July 2021, Algerian judoka Fethi Nourine withdrew from the 2020 Summer Olympics in the Japanese capital city of Tokyo, after the draw set him on course for a possible showdown against an Israeli opponent.

Nourine took the measure after he was drawn earlier in the day to face Israeli competitor Tohar Butbul in the second round of the under-73kg men’s judo competition, if he were to advance past his first fight.

Nourine said his political support for the Palestinian cause made it impossible for him to compete against an Israeli opponent.

During the same month, Sudanese judoka Mohamed Abdalrasool also withdrew from the Summer Olympics in Tokyo, becoming the second athlete to pull out of the international multi-sport event to avoid facing an Israeli opponent.

The Sudanese athlete made the decision to drop out of the Tokyo Olympics following a similar measure by Nourine and after the draw set him on course for a possible showdown against Butbul in the second round of the under-73kg men’s judo competition.