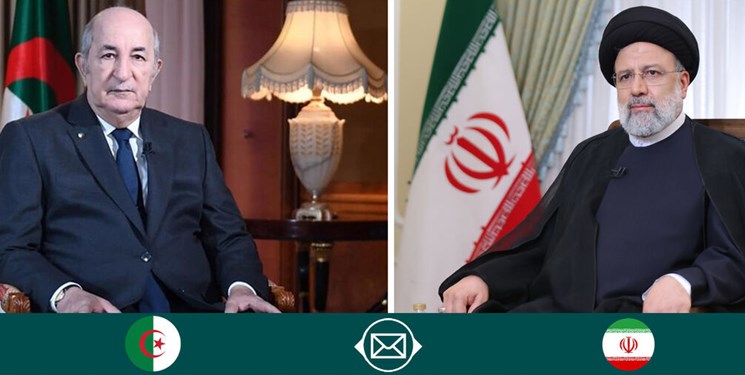 TEHRAN (FNA)- Iranian President Seyed Ebrahim Rayeesi in a telephone conversation with his Algerian counterpart Abdelmadjid Tebboune underlined the need for the expansion of mutual cooperation between the two countries in different fields.

During the phone talk, the Iranian president expressed the hope that Iran and Algeria would further develop their bilateral relations in different areas.

"The establishment of relations between the two countries in the very first days of Algeria's independence is indicative of wisdom and willingness of the leaders of both countries and the existence of historical, religious, cultural and political common grounds," President Rayeesi said.

In a relevant development in September 2021, Iranian Foreign Minister Hossein Amir Abdollahian in a meeting with his Algerian counterpart Ramtane Lamamra in New York underlined the need to follow up on the implementation of mutual agreements.

During the meeting held on the sidelines of the 76th Conference of the United Nations General Assembly held September 21-27, the Iranian foreign minister called for holding Tehran-Algiers political committee meeting to review ways to upgrade bilateral relations.

Amir Abdollahian expressed satisfaction over the current level of cooperation between the two countries and appreciated Algeria for its stance on regional developments.

The Algerian foreign minister, for his part, welcomed Amir Abdollahian's proposals and expressed his readiness to fly to Tehran to review the mentioned issues.

The two also exchange views about different aspects of cooperation and developments in North Africa and West Asia.

Amir Abdollahian left the country for the UNGA conference on September 20.

The Iranian foreign minister met with about 50 political and international officials on various issues. Amir Abdollahian left New York for Tehran on September 25.