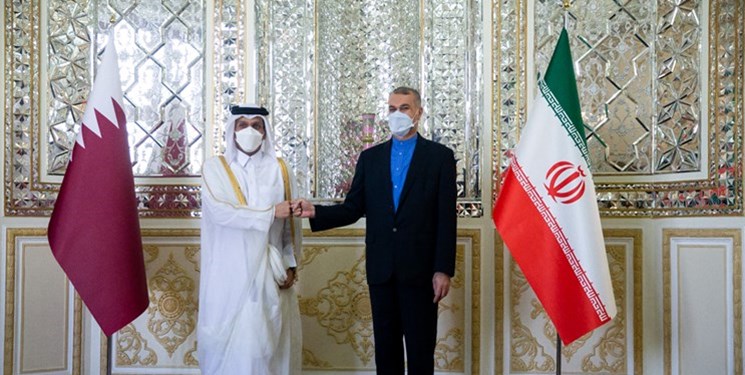 TEHRAN (FNA)- Iranian Foreign Minister Hossein Amir Abdollahian said that the country’s negotiators in Doha talks on the removal of sanctions have not raised any demand irrelevant to the nuclear deal, and dded that the US reluctance to provide the needed guarantees for Iran's continued economic interests under the deal is the main cause of prolonged talks.

Amir Abdollahian made the remarks on Wednesday in a joint press conference with his Qatari counterpart Mohammad bin Abdul Rahman Al Thani in Tehran.

He dismissed the US claim that Iran in Doha made demands that were unrelated to the JCPOA.

Amir Abdollahian noted that Iran raised a key issue and it demanded effective guarantees from Washington regarding full economic benefits from the nuclear deal.

He added that Iran made no excessive demands in the Qatari capital, contrary to the US officials and media claims, saying that Tehran is still ready for a good and lasting deal.

Amir Abdollahian said Iran is negotiating in good faith and is open to logical dialogue and it is serous in this regard.

He noted that the western parties have time and again told Iran that they will remove any obstacle on the way of Tehran’s enjoying economic benefits of the nuclear deal, but the US has not provided the needed guarantees to this end.

"Regarding guarantees, the US has failed to ensure Tehran of their materialization," he said.

The top Iranian diplomat also appreciated Qatar for hosting the talks between Iran and the other sides to revive the JCPOA.

He also referred to his negotiations with the Qatari foreign minister, saying that he and the top Qatari diplomat held constructive talks on the necessity for bolstering regional mechanisms.

Al Thani, for his part, said that talks between Iran and the Persian Gulf countries can have positive results for the region.

He added that it is important that all parties make constrictive efforts in this regard, noting that Doha supports regional dialogue.

The Qatari foreign minister then referred to the talks on the revival of the JCPOA, saying, “We have always tried to support the talks to reach a deal for the purpose of dispelling concerns and paving the way for all sides to return to their undertakings.”

Iran and the five remaining parties to the multilateral deal, officially known as the Joint Comprehensive Plan of Action (JCPOA), have held several rounds of negotiations in the Austrian capital of Vienna since April last year to restore the agreement, which was unilaterally abandoned by former US President Donald Trump in May 2018.

EU Deputy Foreign Policy Chief Enrique Mora coordinated the indirect negotiations between Iran and the US in Doha in late June aimed at resolving the differences hindering the revival of the 2015 nuclear deal, officially known as the Joint Comprehensive Plan Of Action, JCPOA.

Amir Abdollahian said on Friday that the JCPOA revival talks can succeed if the US acts realistically and provides Tehran with robust guarantees that it will be able to fully reap the economic benefits of the deal.