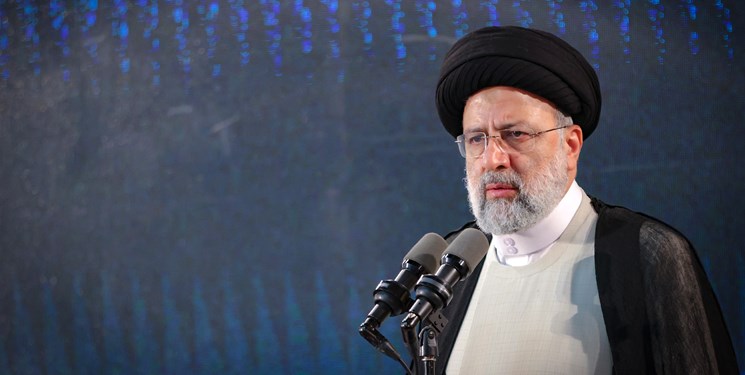 TEHRAN (FNA)- Iranian President Seyed Ebrahim Rayeesi described the hegemonic approach of the Western countries, their unlimited encroachment on natural resources and the production of various pollutants as the main factors of environmental destruction.

Speaking on Tuesday morning at the "Regional Ministerial Meeting of Environmental Cooperation for a Better Future" which was held with ministers and officials of 11 regional countries taking part at Darabad Museum in Tehran, President Rayeesi thanked the activists in this field and described the concern of environmental protection as an inevitable priority.

"Economic and industrial development is a necessity for all countries, but this development must be marginal compared to environmental protection," he said.

The president stated that until the environment is safe and peaceful for the people, development will not be in the right place in the hearts and souls of the people and in the economic and social system.

"If this condition is not fulfilled, that industrial development becomes a threat to human life, so protecting the environment is a very important and priority issue," he added.

Expressing his satisfaction that friendly and neighbouring countries focused their attention on the important and intergenerational issue of the environment and the need to protect it, Rayeesi said, "I believe that this can be a field for extensive cooperation between countries."

Pointing out that Iran is one of the countries that has paid attention to the issue of the environment in its constitution and has introduced it as a requirement for the growing social life of mankind, the Iran's president clarified, "The destruction of the environment, which in itself is the result of social and political inequalities, as well as the wrong use of nature, are one of the important factors in the violation of human rights."

"Islam considers creation beyond nature, and the humanity is not only responsible for protecting nature, but as an agent within the system of divine creation, any behaviour, deed and even thought is effective in the balance of this system," Rayeesi pointed out.

"Undoubtedly, the reduction of biological and food security, the creation of pollution, the indiscriminate harvesting of non-renewable resources and the reduction of biodiversity have led to a decrease in public welfare and a negative impact on the economy and health of the residents of these areas," he continued.

"On the other hand, the greed of the domination system, terrorism, depriving the governments and nations of the region from knowledge, technology and participation in decision-making have caused irreparable environmental challenges," he said.

Rayeesi also described the hegemonic approach of Western governments during the past centuries and their unlimited encroachment on natural resources, especially in countries under colonisation, and the production of various pollutants in different parts of the world to achieve the current economic development, as one of the main factors of environmental problems.

He emphasised that "on this basis, naturally, there is an expectation that they take more responsibility in this field, not to use it as a path for a new type of colonialism in technology and establish a new colonialism".

The president stated that one of the characteristics of tyrants described in the verses of the Quran is the destruction of nature and the human race, and noted, "One of the most central points that I emphasised in last year's video speech at the United Nations General Assembly was the need to preserve the environment and the challenges and disasters that neglecting the environment can create for the world and nature and endanger the human race, and I drew the attention of all countries to this very important and necessary issue."

"The important thing that needs to be addressed in this meeting today is that the issue of environmental protection should be considered as a very important matter, away from the usual administrative and organisational formalities and diplomatic relations between countries," he added.

Pointing out that official discussions between countries are often international formalities and usual diplomacy, the president stated, "I urge the respected head of the Department of Environment, the participating ministers and experts who are present in this gathering to take this issue away from formalities. They should see the usual diplomatic and political views, think about it and design and follow effective solutions to protect the environment, because the usual formalities prevent it from reaching the right and worthy result".

"The Islamic Republic of Iran, by drafting national laws, including the 50th Article of the Constitution, as well as by establishing religious teachings and relying on indigenous knowledge and prioritising values such as justice, equality, contentment and respect for nature, along with membership in assemblies for environmental issues has paid special attention to environmental protection and has taken effective measures to promote and improve environmental conditions and eliminate pollution created in the country," he added.

The Iranian president stated that in the past years efforts have been made to use the scientific and specialised power of the country in the field of achieving sustainability and environmental justice.

"I emphasise that one of the basic dimensions in the type of communication we have with our neighbours and in foreign policy is to respect the right of the neighbour," he continued.

"Dealing with some environmental challenges, including the crisis of increasing dust storms, is a cross-border issue and requires international and regional determination. The mechanism for solving environmental issues depends on regional cooperation and convergence, and the Islamic Republic of Iran welcomes regional cooperation and convergence to overcome these challenges in order to improve the environment," the president continued.

He stated that the desire to hold this meeting is a sign of the Islamic Republic of Iran's will to pursue the issue of environmental protection in the region, and clarified, "I will present some suggestions to this meeting to be examined in task forces and meetings. What is not hidden from anyone is the need for proper cooperation of neighbours to achieve a common vision and action on the issue of the environment".

"As the largest possessor of clean energy resources, the Islamic Republic of Iran is ready to share its experience and knowledge of biotechnology with other countries, especially its dear neighbours, in order to reduce pollution and protect the environment," he said.

"Another point of interest for this cooperation is that in order to achieve the goals stated in the UN resolutions, many of which have been carried out with the follow-ups of the Islamic Republic of Iran, it is necessary to establish a regional fund for financial support of executive measures in the field of action," he noted.

"Therefore, the proposals of the Islamic Republic of Iran include the establishment of a mechanism and organisation in the form of a regional union, the creation of a financial fund as a financial support for executive actions, the need to carry out some kind of division of labour between the member countries and the formation of the secretariat of this union in order to diligently follow up on the resolutions, because if there is no secretariat, the resolutions of these organisations will not be followed and implemented as they should be," he continued.

"Any shortcoming in this regard will cause serious and irreparable damage to the people and the environment, which should be avoided. The passage of time is not in our favour and we should make firm and serious decisions in this limited time and seek to implement these decisions and resolutions," Rayeesi said.

"I hope that holding this meeting will be a source of blessing for Iran and the countries of the region and a manifestation of solidarity, cooperation and companionship for other regions of the world, so that they can see that this convergence and cooperation has been able to create a new task in the region, to solve environmental problems and make the environment completely calm and safe for people's life and progress," he concluded.

Iranian officials called on the regional states to increase cooperation to resolve the dust storms problem in the region.