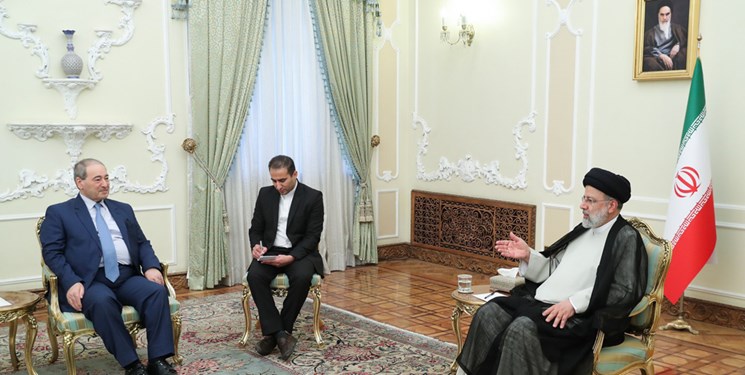 TEHRAN (FNA)- Iranian President Seyed Ebrahim Rayeesi lauded the Syrian people's resistance during the past 11 years of foreign-backed war in their country.

The Iranian president made the remarks in a meeting with visiting Syrian Foreign Minister Faisal al-Mekdad in Tehran.

President Rayeesi reiterated that the Americans have no option but to withdraw from Syria.

"America's withdrawal from East of the Euphrates and the entire region is the fundamental solution to the crises in West Asia," he added.

The Iranian president, meantime, emphasized the need for the Syrian army to regain its control over all of the borders of the Arab country.

“Syria’s national sovereignty must be respected,” he said, adding that ignoring the issues he mentioned will cause various threats.

The top Syrian diplomat conveyed President Bashar al-Assad’s greetings to Iran's leaders and appreciated Tehran's hosting of the latest round of talks to establish peace in his country.

In a relevant development earlier on Wednesday, Mekdad met with his Iranian counterpart Hossein Amir Abdollahian.

During a press joint press briefing after the meeting, the Syrian foreign minister said that “nothing can threaten Syria's independence and sovereignty".

Amir Abdollahian also expressed concern regarding a fresh potential Turkish invasion of Northern Syria under the pretext of fighting "terrorists".

“We hope that these pieces of advice that were emphasized by the heads of states attending the summit are heeded by the authorities of the friendly and brotherly country Turkey so Damascus and Ankara would be able to cross this stage in the absence of any confrontation," he added.