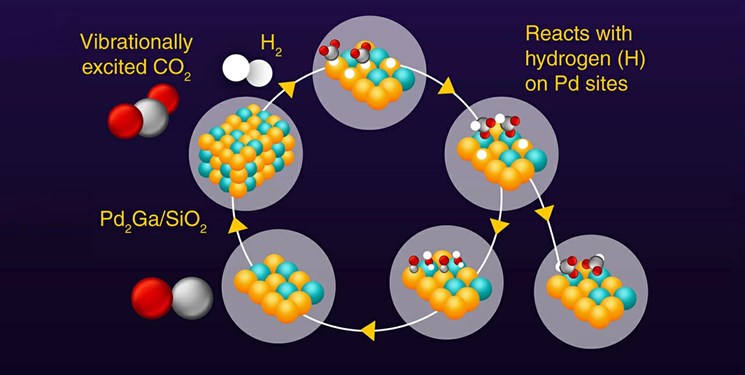 TEHRAN (FNA)- Nonthermal plasma (NTP) is used to activate CO2 molecules for hydrogenation into alternative fuels at low temperatures, also enabling the conversion of renewable electricity to chemical energy. Researchers from Tokyo Tech combined experimental and computational methods to investigate the hydrogenation pathway of NTP-promoted CO2 on the surface of Pd2Ga/SiO2 catalysts. The mechanistic insights from their study can help improve the efficiency of catalytic hydrogenation of CO2 and allows the engineers to design new concept catalysts.

Climate change accelerated by excess CO2 emissions has been a major concern over the past few years. To deal with this problem, technologies that can not only reduce and remove excess CO2 emissions but also transform them into value-added chemicals are being developed. One such method is the hydrogenation of CO2 using renewable hydrogen to produce alternative fuels.

Over the years different strategies have been developed to improve CO2 hydrogenation in the presence of metallic catalysts. The most promising among them is nonthermal plasma (NTP). It promotes hydrogenation of CO2 beyond the thermodynamic limit even at low temperatures without deactivating metallic catalysts, which are vulnerable to higher temperatures. Despite the rising popularity of this technique, the interactions between the NTP-activated species and metallic catalysts are still not well understood.

Fortunately, a team of researchers from Tokyo Institute of Technology (Tokyo Tech), Japan, led by Prof. Tomohiro Nozaki, devised a study to overcome this gap in understanding. In their recent breakthrough, published in the Journal of the American Chemical Society, the researchers revealed the reaction dynamics for NTP-assisted CO2 hydrogenation on the surface of Pd2Ga/SiO2 alloy catalysts that lead to the formation of formate. Prof Nozaki explains "Reaction mechanisms like Eley-Rideal or E-R pathway have been proposed to explain efficient CO2 conversion at lower temperatures and the activation energy for this reaction decreases dramatically. Moreover, NTP produces a copious amount of vibrationally activated CO2 which is the key to enhancing CO2 conversion beyond the thermal equilibrium."

The team investigated the reactions between NTP activated CO2 and Pd2Ga/SiO2 alloy catalysts in a fluidized-bed dielectric barrier discharge reactor  and compared them to conventional thermal catalysis. The results revealed that the CO2 conversion into formate was more than two-fold in the case of NTP-assisted hydrogenation when compared to thermal conversion. To further establish the mechanics of the mentioned conversion, the scientists adopted in situ spectroscopic analysis and density functional theory (DFT) calculations.

The results revealed that the NTP activation gave rise to vibrationally excited CO2 molecules which directly react with hydrogen atoms adsorbed by the Pd sites on the catalyst via the E-R pathway. One of the O atoms from the reacted species then got adsorbed at the neighboring Ga site resulting in the formation of monodentate-formate or m-HCOO. The DFT calculations also deduced a decomposition pathway for the same m-HCOO species.

This experimental-theoretical study showed that NTP can promote CO2 hydrogenation to limits those conventional thermal methods can hardly reach. It also provided mechanistic insights into NTP activated CO2 and catalyst interaction, which can be utilized to develop better catalysts and improve the hydrogenation process. "With our research, we wanted to accelerate the waste to wealth initiative. Capturing CO2 and using it as feedstock for synthesis of fuels and valuable chemicals will not only help us deal with climate problem but also slow down fossil fuel depletion to some extent," concludes Prof. Nozaki.