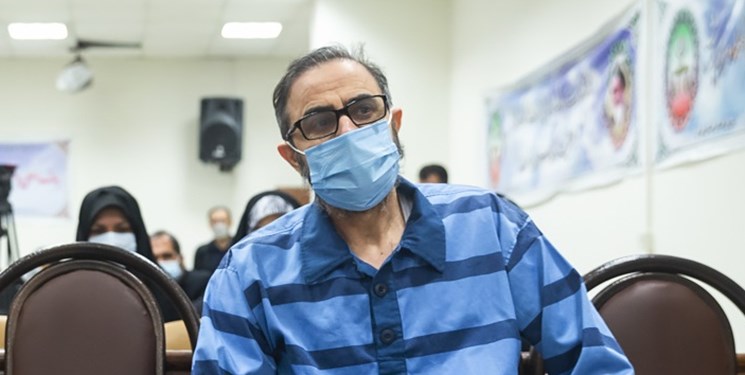 TEHRAN (FNA)- The ringleader of Al-Ahwaziya separatist and terrorist group conceded at his trial on Sunday that he has been receiving support from Stockholm and the Swedish intelligence agency.

Speaking during a court hearing in the Iranian capital of Tehran, Farajollah Chaab nicknamed Habib Asyoud said the Swedish officials gave him a device and told him to push a button thereon in case he was in danger, and added that they told him they would rush to rescue him upon his pushing of the button.

Judge Iman Afshari asked the defendant whether he admits to be a Swedish national and had been receiving support from that country’s government and intelligence officials.

Chaab stated that he is a "resident and national of Sweden" and that "the Swedish government provides support for him".

“They gave me a device so I could press its button when I felt danger, and it would alert the Swedish government security agents, and they would rescue me wherever I was,” he admitted.

Chaab is responsible for a terrorist attack in Ahvaz, Khuzestan Province, Southwestern Iran, in September 2018.

The lawyer of the families whose loved ones were killed in a terror attack by Chaab, stated the ringleader of the Nadhal terrorist cell was responsible for killing innocents and causing material damage to public property in Khuzestan by using bombs, grenades and Klashnikov rifles.

The lawyer demanded the death penalty for the defendant.

Speaking during the session, prosecutor’s representative said that Sweden has turned into a safe haven for the elements of terrorist groups like, Pejak, Nadhal Movement and MKO.

"Chaab is a Swedish citizen and has been receiving support from the Swedish government while he has had a red warning and has been under prosecution of international organizations," he added.

The prosecutor’s representative noted that Chaab was arrested in Poland in 2019 where he had gone to attend a conference of terrorist groups, but the Swedish government stepped in and the US administration also began to lobby so that he was taken back to Sweden with a special flight to continue with his terrorist activities.

In September 2018, the so-called Arab Struggle Movement for the Liberation of Ahvaz terrorist group (SMLA) claimed responsibility for an attack on a military parade in Ahvaz that killed 25 people, including members of Iran’s Islamic Revolution Guards Corps (IRGC) and civilian bystanders, and injured 70 others.

Chaab was arrested in November 2020 on the back of a set of “specialized and combined measures” by Iranian intelligence forces. In mid-January, he appeared in a court in Tehran for the first time since his arrest

During the fifth session of the trial in late February, the prosecutor presented evidence disclosing Saudi Arabia’s plots to disintegrate Iran

Prosecutor’s representative Amin Vaziri said that Chaab had admitted that the Saudi intelligence service pushed to unite all terrorist and separatist movements under a single umbrella organization to counter Iran following the formation of the Islamic Awakening movement.

He added that the Saudi intelligence service has also launched several satellite channels with the aim of facilitating the partitioning of Iran.

The prosecutor’s representative noted that the defendant had formed a terrorist group to carry out acts of terror in Iran and cooperated with anti-Iran terror groups, including PJAK and Jaish ul-Adl.

During the third session of the trial in early February, the prosecutor's representative had also presented evidence showing the Saudi and Israeli sponsorship for the separatist outfit.