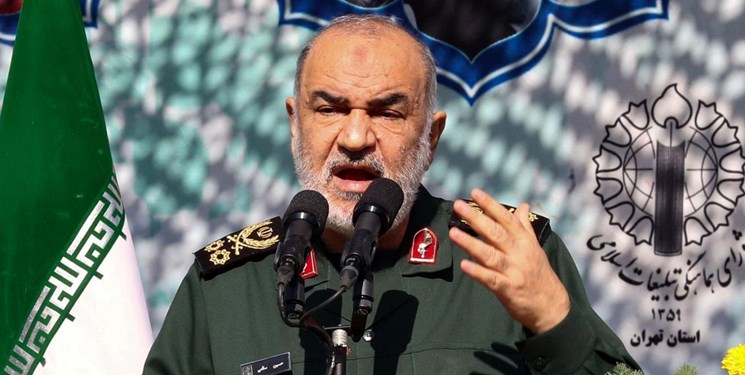 TEHRAN (FNA)- Commander of the Islamic Revolution Guards Corps (IRGC) Major General Hossein Salami stated on Sunday that the recent developments in West Asia show the decline of the US power and influence, and called President Joe Biden's recent tour of the region a fruitless move.

He pointed to the US failures in Afghanistan, Syria, and Egypt, as well as various plots the US pursued in vain in cooperation with the Israeli regime, and stated, “These cases are signs that herald a big event, which is the [total] defeat of the US.”

The United States is drawing constant plans to install puppet governments but all such schemes are collapsing “like dominos”, he continued.

IRGC Commander: US Too Weak, No Longer Plays Role in Regionhttps://t.co/QYyLfIcvNA pic.twitter.com/1mGhjFd5KW

“Enemies are currently unable to help each other and are disintegrated and disunited,” the IRGC chief added.

The top commander also said both Saudi Arabia and the US are unable to do anything for each other, adding, “Saudi Arabia, which used to help America with money, has lost its ability to solve its own economic problems today.”

Referring to the so-called Donald Trump’s “Maximum Pressure Campaign” against Tehran, Maj. Gen. Salami Stated, “When we are in an economic war but we do not look like a defeated country, it is a sign of victory."

The military official said that the Iranian people deeply believe that the country is heading towards power and progress.

Pointing to US President’s visit to the Middle East earlier this month, the IRGC commander emphasized that the trip failed to bring about any achievement for Washington.

Iran says Israel is the primary source of instability in West Asia, and the United States remains responsible for the instability in the region as long as its wrong and crisis-making policies are not rectified.

Iranian officials have repeatedly reiterated the need for foreign troops to leave West Asia, emphasizing that Tehran will never back down on its stance in this regard.

Tehran has also underlined the necessity for the settlement of the crises and problems in the region through collective cooperation among the regional states, and underscored that the presence of foreigners is harmful.

Recently, Tehran urged the neighboring countries to be extremely vigilant about any US-Israeli plan that clearly aims to disturb the stability and order of the region.

On Thursday, President Seyed Ebrahim Rayeesi said military option has been excluded from enemies’ policies towards Iran due to the country’s might, and added that the regional countries enjoy safety because of Tehran's power.

President Rayeesi also warned that everyone has to know that the smallest aggression against Iran will receive a crushing response.