Iran: Vienna Talks Chance for US to Fulfill Commitments 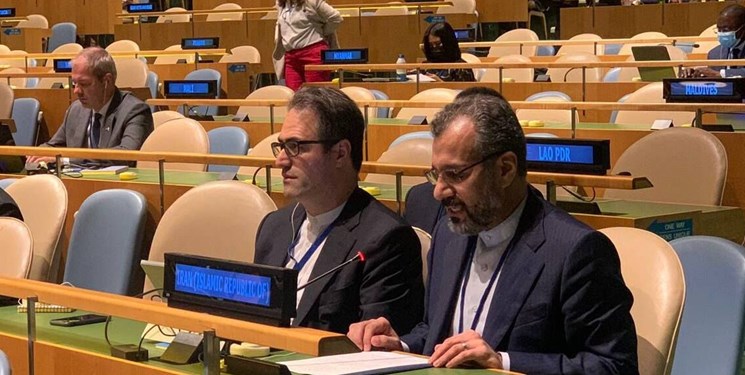 TEHRAN (FNA)- The US can use the opportunity of the Vienna talks to show and prove its seriousness for returning to the Joint Comprehensive Plan of Action (JCPOA), a senior Iranian diplomat said.

"Indeed, the ongoing talks in Vienna provide the United States with an ample opportunity to demonstrate its seriousness to return to its obligations under the JCPOA," Iranian Foreign Ministry's Director General for International Peace and Security Asadollah Eshragh Jahromi said, addressing the Tenth NPT Review Conference in New York .

The following is the full text of Eshragh Jaromi's speech at the UN NPT conference in New York:

I would like to exercise my delegation’s right of reply against the unfounded accusations and unacceptable statements made by the representatives of the United States, the UK, France, Germany and some others on the JCPOA and Iran’s peaceful nuclear program, whereas the NPT recognizes the inalienable right of its state parties to enjoy peaceful uses of nuclear energy. Like all other parties to the NPT, Iran has an unquestionable right to benefit from its membership.

"Together with the overwhelming majority of the international community, we believe that while the US, the UK, and France are actively involved in strengthening and modernizing their nuclear arsenals which pose an existential threat to humanity per se, while Germany as a non-nuclear weapon state party to the NPT is hosting numerous nuclear weapons on its territory in contravention to its NPT obligations, and while they all turn a blind eye to the threat of the clandestine military nuclear program and arsenal of the Israeli regime and extend unqualified support to this regime, they have no moral ground to give those hypocritical statements on Iran’s peaceful nuclear program," Eshragh Jahromi said while addressing the Tenth NPT Review Conference in New York on Thursday.

In fact, besides double standards and unfaithful approaches while pretending to have a passionate agenda, what could cause grave concerns in the international community is their non-compliance with their legally binding obligations.

I should underscore that JCPOA is a comprehensive plan of action meticulously negotiated and concluded between Iran and E3/Eu+3 as a final solution for the unnecessary and artificial crisis created over Iran's peaceful nuclear program. Its unanimous endorsement as an inseparable part of UNSC Resolution 2231 is a multi-party agreement based on reciprocity.

Just to remind that the uncontested reality is that Iran has so far adhered to the JCPOA terms while US and E3 have failed to meet their JCPOA obligations. By all accounts, after the US withdrew from JCPOA in May 2018 and reinstated the sanctions that were supposed to be lifted, and even imposed further new ones, Iran remained in full compliance with its commitments. In response to the restoration of US sanctions, Iran had to take certain remedial measures, time and again, consistent with the provisions of the JCPOA, including paragraphs 26 and 36 that allow Iran to do so.

I should underline our steadfast optimism that Iran will fully implement the JCPOA if the other JCPOA participants keep their end of the bargain.

It is regrettable that the current US Administration while having criticized Trump for his maximum pressure policy against Iran, in practice, has continued to enforce those sanctions and has even added more sanctions against us. It is a matter of further regret that the European participants of the JCPOA have not only failed to honor their obligations but also have started to side with the US that has violated its JCPOA obligations.

The above-said representatives must realize that neither the gambit of using sanctions to leverage further Iranian concessions nor adopting a creditor approach will be effective against Iran.

It has been the responsibility of the US and the other participants in the JCPOA to ensure that Iran benefits from the advantages of its implementation and that the deal does not collapse due to the US's unacceptable behavior.

Indeed, the ongoing talks in Vienna provide the United States with an ample opportunity to demonstrate its seriousness to return to its obligations under the JCPOA.

On another note, despite all challenges, Iran has continued its constructive cooperation and technical engagement with the IAEA. Despite all rhetoric and allegations against Iran, we are fulfilling our Safeguard Agreement with the IAEA as the mere instrument that legally applies to Iran’s nuclear program.

I  thank you Mr. President