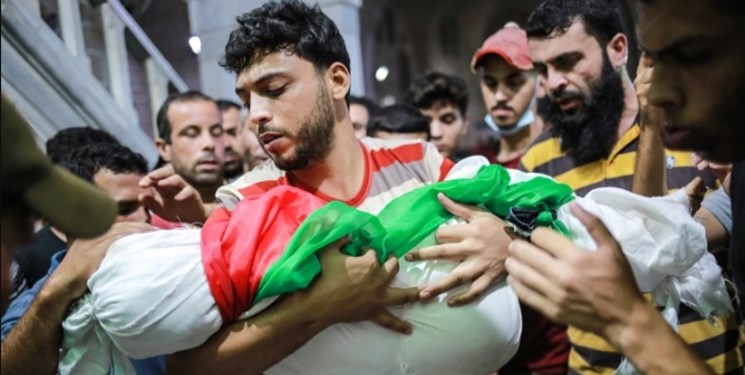 TEHRAN (FNA)- The Islamic Jihad fired more than 100 rockets toward the occupied territories after the Israeli regime assassinated one of the Palestinian resistance movement’s senior commanders during a massacre.

The movement called the retaliatory barrage only an “initial response” to the Israeli bloodbath that killed 10 people, including the commander and five-year-old child, in the city of Rafah which is located in the Southern part of the Tel Aviv-blockaded Gaza Strip, presstv reported.

"As an initial response to the killing of senior commander Taysir Al-Jabari and his brethren martyrs... the Al-Quds Brigade covered Tel Aviv, central cities, and areas surrounding Gaza with more than 100 rockets," the Islamic Jihad's military wing said in a statement on Friday.

The Palestinian Health Ministry said well over 40 people had also been injured in the Israeli attack earlier in the day.

Secretary-General of the Islamic Jihad, Ziyad Al-Nakhalah said the Israeli enemy must expect a "non-stop" confrontation in the wake of the Friday aggression.

There will be no truce following this attack, the Islamic Jihad official said. All resistance groups must struggle under one flag in this fight, Nakhalah said.

"We will sacrifice our blood and our weapons and we will not hesitate for a moment to respond to this aggression," he added.

Hamas spokesman Fawzi Barhoum underscored the unity of resistance groups in the battle against occupiers.

The resistance fighters will defend the Palestinian people with everything they have and will continue to fight until victory in all areas, he said.

Israeli Minister for Military Affairs Benny Gantz has said the regime will call up some 25,000 reservists. Israel has also deployed reinforcements near Gaza.

Israeli forces recently arrested Bassam Al-Saadi, a senior figure of the Islamic Jihad, in a raid in Jenin. Soon after the arrest, Israeli authorities announced the closure of crossings at the Israeli fence separating Gaza from the occupied territories.

The Israeli military has ordered an emergency in all cities and towns within 50 miles of the border with Gaza. The regime says resistance rockets will likely be launched against targets in the occupied territories.

Meanwhile, Nakhalah said the situation in Gaza was reminiscent of the days of Saif Al-Quds Operation. He was referring to the last military confrontation between Palestinian resistance forces and the Israeli regime in 2021.

In May that year, frequent acts of violence against Palestinian worshipers at Al-Aqsa Mosque led to an 11-day war, during which the regime killed at least 260 Palestinians, including 66 children.

Last May, Gaza’s resistance groups fired around 4,000 rockets during Operation Sword of Al-Quds after the Israeli regime initiated its last war against the coastal enclave.

Also on Friday, Palestinians demonstrated in the city of Ramallah in the Israeli-occupied West Bank, denouncing the Israeli regime’s air raids on Gaza.