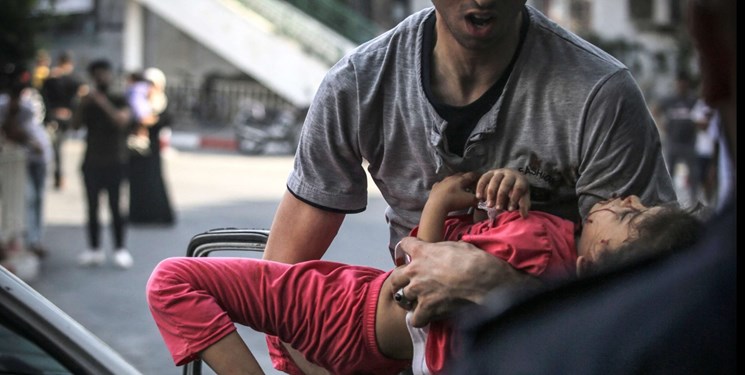 TEHRAN (FNA)- Iran lashed out at the Israeli regime over its brutal attack on the residential areas in the besieged Gaza Strip which killed and wounded dozens of civilians, and said that the Palestinians and resistance movements have the right to respond to Tel Aviv's terrorist acts.

Ten people, including a senior commander of the Islamic Jihad and a five-year-old child, have been martyred in an airstrike by Israel on a center affiliated with the resistance movement in the Gaza Strip on Friday. The Palestinian Health Ministry announced dozens of civilians were also injured in the assault in Rafah.

"It is the legal right of the Palestinian people and resistance groups to act and defend themselves in the face of the aggression and terrorist moves of the Zionist regime," Iranian Foreign Ministry Spokesman Nasser Kana'ani stressed on Friday.

He added that the Israeli regime's new wave of air raids across the besieged Palestinian enclave was a "criminal, adventurous and provocative" move.

The spokesperson emphasized that the "apartheid regime of Israel" shoulders full responsibility for the "crime" and the consequences of its aggression on Palestine and the Gaza Strip.

Kana'ani urged all countries and international organizations to "fulfill their legal, moral and human responsibility to defend the oppressed Palestinian people and condemn the Israeli regime's terrorist moves".

"They should also take measures to stop the continuation of such crimes by the Tel Aviv regime, which is the main factor behind instability and insecurity in the region," he continued.

In response to the fatal attack on Gaza, Secretary-General of the Islamic Jihad Ziyad Al-Nakhalah warned that the Israeli enemy must expect a "non-stop" confrontation.

There will be no truce following this attack, the Islamic Jihad official stated. All resistance groups must struggle under one flag in this fight, Nakhalah added.

Israeli adventures will not go unanswered, he continued, saying that the Zionist enemy bears full responsibility for the airstrike.

"All Israeli cities could be in the cross hairs of resistance fighters," Al-Nakhalah warned, noting, "We will sacrifice our blood and our weapons and we will not hesitate for a moment to respond to this aggression."

Later, the Islamic Jihad fired more than 100 rockets toward the occupied territories after the Israeli regime assassinated the Palestinian resistance movement’s senior commanders during the massacre.

An official in the Islamic Jihad movement also noted there has been no talk of calm or mediation for the moment.

The unnamed official was quoted by local Palestinian news agency as saying that the situation “is heading for an escalation”.

The resistance movement Hamas also announced that the Israeli enemy "committed a new crime" and must "pay its price".

Hamas Spokesman Fawzi Barhoum underscored the unity of resistance groups in the battle against occupiers.

The resistance fighters will defend the Palestinian people with everything they have and will continue to fight until victory in all areas, he underlined.

The international community has also strongly condemned the latest Israeli assault on the Gaza Strip, voicing its deep concern over the latest rounds of violence by the Tel Aviv regime against Palestinians in the besieged coastal enclave.