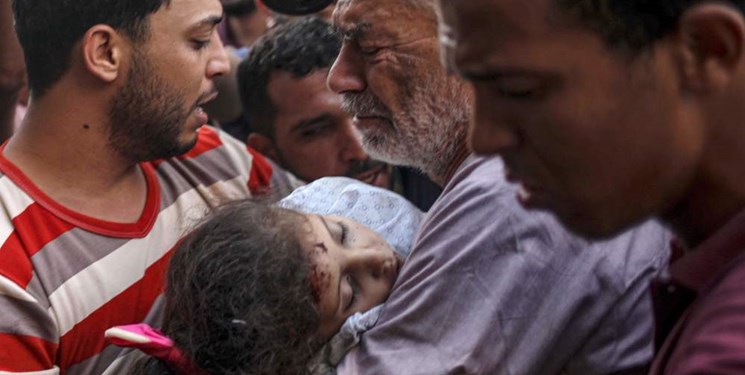 TEHRAN (FNA)- The international community has strongly condemned the latest Israeli airstrikes in the Gaza Strip that killed at least 10 people, including a 5-year-old girl, and injured more than 40 others, voicing its deep concern over the latest rounds of violence by the Tel Aviv regime against Palestinians in the besieged coastal enclave.

The Palestinian Authority condemned “the Israeli aggression on the Gaza Strip and demanded its immediate cessation”, presstv reported.

“The presidency called on the international community to compel Israel to stop this aggression against our people everywhere, particularly in Gaza, and to provide them with international protection,” it said in a statement.

The UN special coordinator for the so-called Middle East peace process warned the “dangerous” escalation risked creating the need for more aid at a time when world is facing other conflicts.

“In the past few hours, at least 10 Palestinians were killed by Israeli air strikes. I am deeply saddened by reports that a five-year-old child has been killed in these strikes. There can be no justification for any attacks against civilians,” Tor Wennesland said.

The Arab League in statement condemned the Israeli aggression against the Gaza Strip, and said “it holds the occupiers responsible for its consequences and bloody crimes.”

Turkey on Saturday strongly condemned the Israeli airstrikes on Gaza, and said it is “unacceptable that civilians, including children, lose their lives in attacks”.

The Turkish Foreign Ministry in a statement urged “restraint and common sense” amid rising tension in the region following the deadly attacks on the blockaded coastal sliver.

“We are deeply concerned about the rising tension in the region after the attacks. We emphasize the need to end these events before they turn into a new spiral of conflict,” it said.

Jordan also demanded that Israel “immediately stop its aggression” on the Gaza Strip.

Foreign Ministry Spokesman Haitham Abu Al-Ful warned of “dangerous” consequences that “will only increase tension and violence and deepen the environment of despair”.

“The solution to the problem of the Gaza Strip and preventing the escalation of violence lie in finding a real political horizon by returning to the negotiating table to achieve a just peace on the basis of the two-state solution,” he said.

“We hope to reach a consensus to return to calm as soon as possible,” the source said.

Separately, another source said a delegation from the Gaza-based Islamic Jihad resistance movement may head to Cairo later on Saturday.

Qatar also expressed its “strong condemnation and denunciation” of Friday’s deadly attacks on the Gaza Strip.

The Qatari Foreign Ministry in a statement stressed “the need for the international community to move urgently to stop the [Israeli] occupation’s repeated attacks against civilians, especially women and children.”

The ministry reiterated, “The State of Qatar’s firm position on the justice of the Palestinian cause, the legitimate rights of the brotherly Palestinian people, and the establishment of their independent state on the 1967 borders, with East Jerusalem as its capital.”

“We condemn the Israeli aggression on Gaza, and ask the international community to fulfill its responsibility towards the Palestinians,” it said in a statement.

Algeria also expressed its concern about the escalation of tensions, saying, “We strongly condemn the brutal aggression of the occupying Israeli forces on the Gaza Strip.”

The Iraqi resistance movement Asa’ib Ahl Al-Haq also said, “We emphasize our constant solidarity with the Palestinian nation, and their resistance to thwart aggressors' plots.”

The anti-terror Kata'ib Hezbollah movement stated, “We are not surprised by the assassination of our brethren in Gaza by the Zionist regime. We are astounded by the silence of the Arab world.”

“Repeated Israeli attacks against the resilient Palestinian nation are the unfortunate outcome of normalization of ties with the Zionist regime. Targeted killings and bombardment of residential buildings is a confirmation of the enemy’s criminal approach,” it added.

Hadi Al-Amiri, Secretary General of Iraq's Badr Organization, also said, “We condemn the cowardly aggression of the Zionist regime against Palestinians in the Gaza Strip."

He also offered his condolences over the assassination of Tayseer Al-Jabari, top Islamic Jihad commander killed in the Israeli bombing of an apartment in the Gaza Strip on Friday,

“The Zionist enemy continues its crimes amid the silence and submission of the region’s despots, and collaboration of the regimes that support the bogus regime,” Amiri pointed out.

The political bureau of Ansarullah stressed that Palestinians reserve the right to respond to the barbaric aggression of the Tel Aviv regime.

Ansarullah also called on Arab and Muslim nations to honor their responsibilities, and help the Palestinian nation and resistance groups in their struggle against the occupying Israeli regime.