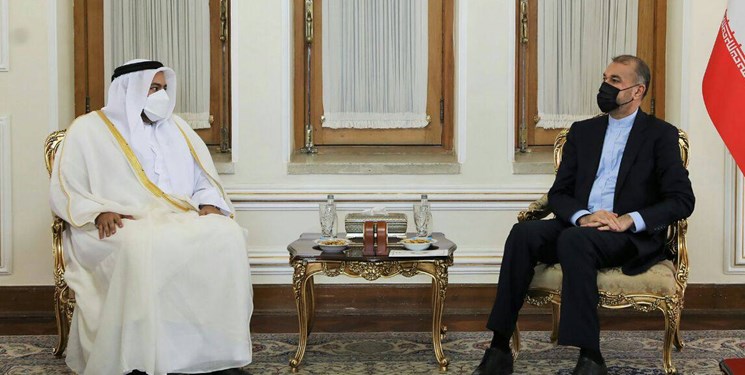 TEHRAN (FNA)- Iranian Foreign Minister Hossein Amir Abdollahian emphasized the necessity for the enforcement of the agreements signed during the Iranian President's visit to Doha and the Qatari Emir's visit to Tehran.

The foreign minister made the remarks in a meeting with Qatar's Assistant Foreign Minister for Regional Affairs Mohammed bin Abdulaziz Al-Khulaifi in Tehran on Saturday.

During the meeting, the two sides discussed issues of bilateral importance and ways for promotion of relations between Tehran and Doha in all fields.

The Qatari diplomat, for his part, stressed his country’s resolve to boost bilateral ties with Iran.

Following their meeting, Al-Khulaifi said in a tweet that the two sides also discussed the developments surrounding the talks to revive the 2015 Iran nuclear deal.

“I thank His Excellency Baqeri Kani for the warm welcome and hospitality. We discussed the latest developments in the regional and international sectors, in particular the developments of the ongoing negotiations on the return of the JCPOA,” he added.

The Rayeesi administration has made ties with neighbors a top priority of its foreign policy.

Iran and Qatar have significantly expanded bilateral cooperation in recent years, especially in trade and commerce. Tehran and Doha have recently grown exchane of visits by officials to speed up expansion of relations.

Iran Asks for Removal of Obstacles to Development of Trade Ties with Qatarhttps://t.co/vCuqHlOxJR pic.twitter.com/YeTNXUdlXy

The Qatari Emir's visit to Iran came three months after the two Persian Gulf neighbors signed a series of bilateral agreements during Reyeesi's visit to Doha.