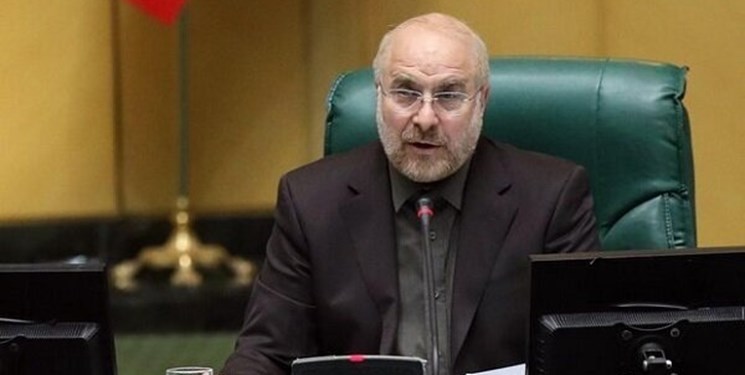 TEHRAN (FNA)- Iranian Parliament Speaker Mohammad Baqer Qalibaf underlined that the decline of the Israeli usurper regime is very near due to unity, amity and empathy of the Resistance movements.

"Under the auspices  of unity, amity, and sympathy of all Resistance movements, it can be said that the decline of the usurping regime of Israel is closer than ever," Qalibaf said addressing an open session of the Parliament on Sunday.

"The Zionist regime is on the verge of collapse as time passes," he added.

Qalibaf, meantime, lauded the Palestinian Islamic Jihad Resistance Movement which managed to give a crushing response to the Israeli enemy.

"The Islamic Jihad Resistance Movement proved that today each part of the Islamic Resistance alone has the ability to crush the deepest defense layers of the Zionist regime and smash their malicious will," he said.

In a relevant development on Thursday, Supreme Leader of the Islamic Revolution Ayatollah Seyed Ali Khamenei underlined that the Palestinian Islamic Jihad proved that any segment of the Resistance front can rub the enemy’s nose to the ground.

The Supreme Leader made the remaks in a Thursday letter addressed to Secretary General of the Gaza-based Islamic Jihad movement Ziyad al-Nakhalah.

He lauded the Palestinian Islamic Jihad movement for its spirited steadfastness and resilience during the recent three-day-long Israeli military onslaught on the besieged Gaza Strip.

Ayatollah Khamenei said that the group proved that any segment of the Resistance front can rub the Tel Aviv regime’s nose to the ground.

The text of the letter of the Leader of the Islamic Revolution is as follows:

In the Name of God, the Compassionate, the Merciful

To my brother who is struggling on the path of God, Mr. Ziyad al-Nakhala (May your achievements continue) Salam Alaykum,

I received your honorable, promising letter with its good news. May God reward you and hurry the ultimate victory of the admirable and oppressed Palestinian nation. The recent event has added to the honors of the Palestinian Islamic Jihad Movement and elevated the status of Islamic Jihad in the magnificent Resistance movement of the Palestinian nation. With your courageous Resistance, you have nullified the policy of deception of the usurping regime.

The usurping enemy is becoming weaker, while Palestinian Resistance is becoming stronger. There is no power or strength except from God. We continue to stand with you. May God’s greetings be upon you, and our agreements are still in place…

In his letter, Ziyad al-Nakhalah confirmed the widespread presence of Palestinian Resistance fighters, particularly from the Islamic Jihad Movement and the military branch of Saraya al-Quds, in all of Palestine and especially in Gaza and the West Bank.

"Due to the presence of the troops of Jihad Resistance, not a single day passes without clashes taking place with the Zionist regime in the West Bank," he added.

In describing the situation that exists in Gaza, the Secretary General of the Islamic Jihad Movement spoke of the strong Resistance in this region that is confronting the occupying regime.

Furthermore, with regards to the three days of clashes, he said, “We have called these clashes Wahdat al-Sahat (Unity of the Fields) to emphasize the unity that exists in our nation when they are confronting the enemy, which is working with all its strength and which schemes to try to abolish this unity.”

While stressing the fact that during this war all of the occupied Palestinian territory was within range of Islamic Jihad Movement’s missiles, Ziyad al-Nakhala said, “This battle frustrated the Zionist regime's estimates to such a large extent that after just three days they were forced to ask for a ceasefire and to accept the terms set by the Resistance.”

The Secretary General of Islamic Jihad said that the enemy's plan is to create a division in the Resistance forces.

"They announced their goal was only Islamic Jihad in this war. However, Islamic Jihad aroused the amazement and support of all the Resistance forces in the region and the world with its powerful, courageous struggle. The Palestinian nation and all of the Resistance organizations, including Hamas at the head, have approved of it and supported it," he added.

The Secretary General of Islamic Jihad said that this achievement of the Resistance is a start to even larger victories of the Palestinian nation to come in the future.

"If your continuous support and the strong stance you have taken did not exist, it would not have been possible to attain this victory or the past victories," he added.