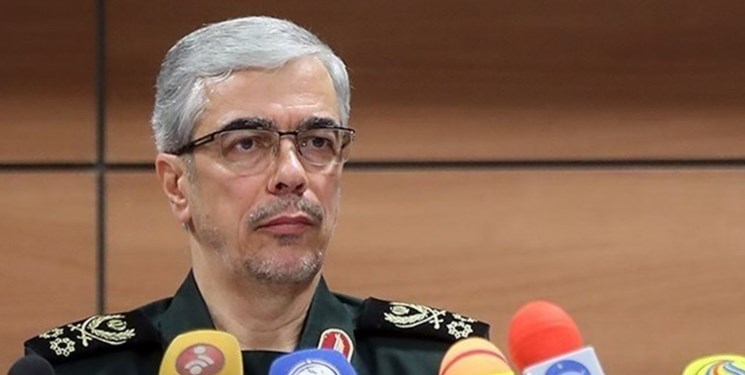 TEHRAN (FNA)- Chief of Staff of the Iranian Armed Forces Major General Mohammad Hossein Baqeri said that the military power of Iran is strong, extraordinary and deterrent despite enemy sanctions and pressures, and hailed the Islamic Revolution Guard Corps (IRGC) Navy for its remarkable developments in the recent decades.

Addressing a gathering of the IRGC Navy commanders and officials in the Northeastern city of Mashhad, Maj. Gen. Baqeri stated that the IRGC Navy, which has a brilliant background in fighting US aggressors in the Persian Gulf, had made significant development in enhancing the power in the fields of fleet, missile, and drone.

“Thank God, we have witnessed incredible and proud advancements and developments in the capabilities of the IRGC Navy over the past four years, which have promoted the Islamic Republic of Iran’s deterrence power,” he stated.

Referring to the Navy’s strategic role and missions, he noted that safeguarding Iran’s interests in the Persian Gulf and the Strait of Hormuz, which is the responsibility of the IRGC Navy, has established a strong defense in this strategic region.

"Despite the enemy’s sanctions and the maximum pressure, Iran’s military power has been strong, extraordinary and deterrent," the military official underlined.

"Navy forces have put on the agenda developing equipment and improving the level of combat power," Baqeri underscored.

Back in late July, Baqeri underlined that the deterrent power of the country's Armed Forces will be further enhanced to dissuades Tehran’s enemies from implementing the their threats against Iran.

He stated that the Iran’s Armed Forces are working to achieve the highest level of deterrence in the face of the threats posed by enemies to rid them of even the dream of launching an act of aggression against Tehran.

“We have set the goal of reaching the peak of deterrence so that the enemies will not have the courage to even dream about attacking Iran,” the Maj. Gen. underscored.