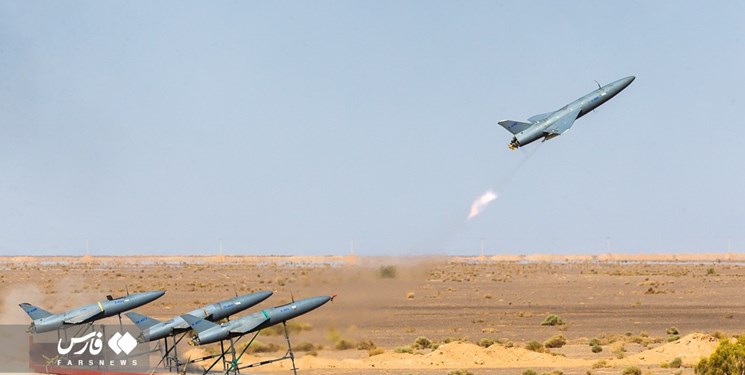 He added that a considerable part of the designated targets have so far been destroyed and the mission will be concluded in the hours to come.

Mousavi noted that various types of combat drones operated by the four units of the Army, namely the Ground Force, Navy, Air Force and Air Defense Force, hit the pre-determined targets in the general area of the exercises — which cover almost all Iranian territory and strategic Southern waters — with precision and high-accuracy weapons in the major operational phase of the maneuvers.

The vice admiral stated a variety of drones with pre-determined operational plans were flown from different remote parts of the country and carried out their missions under the supervision of the drills’ tactical air direction (TAD) center.

“Given the fact that the drills take place countrywide, the Army’s Zolfaghar tactical air direction center and a number of other secondary bases in different locations of the country have been in charge of strategic and operational management of the maneuvers,” he stated.

The Iranian Army started large-scale drone drills across the country with the participation of different units. The massive exercises kicked off on Wednesday morning with the involvement of more than 150 new advanced drones.

The military exercises are participated by forces of four units of the Army, namely the Ground Force, Navy, Air Force and Air Defense Force.

Iran has in recent years gained significant progress in developing surveillance and combat drones. Military officials say Tehran is self-sufficient in building drones from their fuselage to various subsystems and engines, adding the country’s Armed Forces are equipped and ready to carry out any type of drone operations and missions. Tehran stresses its drone capability is non-negotiable.

Back in late May, Iran showed off an underground drone base where a range of advanced drones were housed and operated for potential combat and other missions.

During his visit, Chief of Staff of the Iranian Armed Forces Major General Mohammad Baqeri underscored that the pilotless aircraft have enhanced Iran's deterrence power.

He underlined the significance of drones in defending the country's interests, and added that they have found a special place in different defensive, offensive, land, sea, air and air defense areas.

Noting that deterrence is not possible with old methods and equipment and requires new methods, Maj. Gen. Baqeri said that “the drones that we saw today can play such a role”.