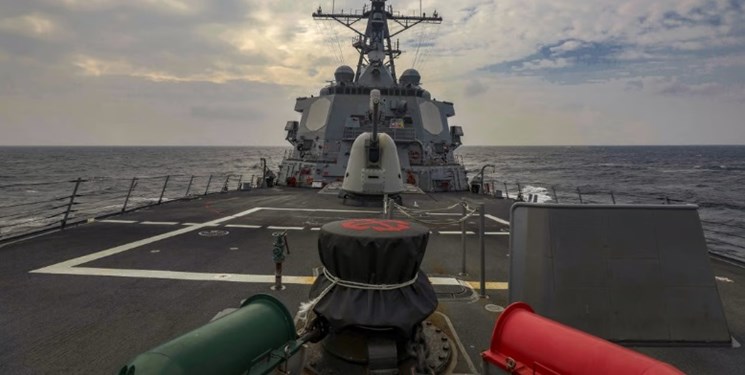 TEHRAN (FNA)- The Chinese air force and navy tracked US and Canadian warships as they transited through the Taiwan Strait on Tuesday, the Eastern Theatre Command of the People’s Liberation Army (PLA) said.

The command said on Wednesday that it monitored the passage of the USS Higgins, an Arleigh Burke-class guided-missile destroyer, and the Canadian navy’s Halifax-class frigate HMCS Vancouver in the Taiwan Strait, South China Morning Post reported.

Senior Colonel Shi Yi, spokesperson for the Eastern Theatre Command, “denounced [the] provocative move”, according to the Chinese military.

“The troops of the PLA Eastern Theatre Command are on high alert at all times to resolutely counter any threat and provocation and safeguard China’s national sovereignty and territorial integrity,” the command said in a statement.

The US Navy 7th Fleet said in a statement that the transit was routine and conducted beyond “the territorial sea of any coastal state”.

The Canadian defence department said the transit was conducted “in full accordance with international law” as part of operations in the Indo-Pacific region aimed at pressuring North Korea to abandon its nuclear weapons.

The Taiwanese Defence Ministry also issued a statement confirming the US and Canadian warships travelled from South to North through the Taiwan Strait on Tuesday. The ministry added the situation was “normal” as it monitored the waters and airspace around Taiwan during the transit.

It was the first American military operation in the Taiwan Strait since US President Joe Biden said in a weekend interview with CBS’ 60 Minutes that the United States would defend Taiwan in the event of an attack by the People’s Liberation Army. The White House later said US policy toward Taiwan was unchanged.

Chinese Foreign Minister Wang Yi on Tuesday warned that the United States’ pro-Taiwan approach might have a “subversive impact” on US-China relations during a meeting with former US Secretary of State Henry Kissinger on the sidelines of the United Nations General Assembly in New York.

He also said Beijing may use its Anti-Secession Law to seek reunification with Taiwan. The 2005 legal framework allows Beijing to use non-peaceful means to guard against the island’s possible separation from mainland China.

Tensions in the Taiwan Strait have escalated since US House Speaker Nancy Pelosi’s visit to Taiwan in August. Beijing retaliated by conducting military drills over several days in six locations, nearly encircling the island.

At the beginning of this month, the Chinese military also sent five warships and four aircraft – including two J-10 fighter jets – to the strait after the US State Department approved a US$1.1 billion arms sale to Taiwan.

Before Tuesday’s operation, the US military’s last transit through the Taiwan Strait was on August 29, when it sent two Ticonderoga-class guided-missile cruisers, the USS Antietam and the USS Chancellorsville.