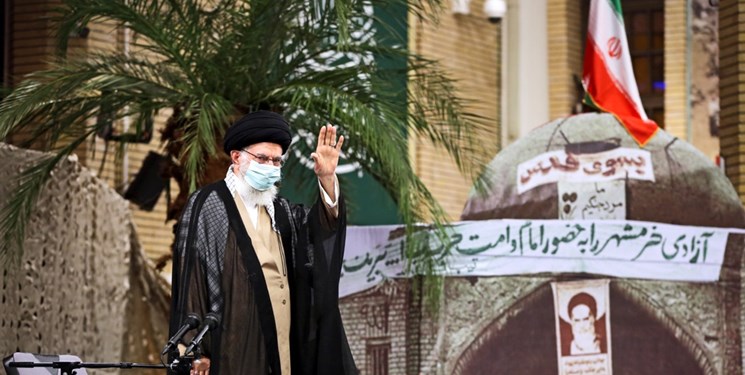 TEHRAN (FNA)- Supreme Leader of the Islamic Revolution Ayatollah Seyed Ali Khamenei said that the enemy has been defeated in the maximum pressure policy against the Iranian nation, and added that the country’s military power has left no room for any concern over external threats.

Ayatollah Khamenei made the remarks in a speech he delivered during a Wednesday meeting with a group of Iranian war veterans, who defended the homeland against ex-Iraqi dictator Saddam Hussein’s war on Iran in the 1980s, on the occasion of the Sacred Defense Week.

"All of their failures are due to the Iranian nation’s spirit of resistance," he stressed.

“Today, the country has fortunately reached the deterrence stage, meaning that its military status has reached the point that the country is not concerned about foreign threats, and the enemies are also mindful of this,” Ayatollah Khamenei noted.

"World’s Arrogant Powers were behind Saddam in his war on Iran, because they were enraged by the Islamic Revolution. The Revolution wasn’t merely a temporary political defeat for the Arrogant Powers. It was a threat to the domineering system of global imperialism," he said.

"They could not tolerate that a nation did not fear the US. So, they wanted to take revenge on Iran. They tried striking blows such as attempts at coups, the Tabas aerial attacks, and inciting ethnic groups, but they failed. So, they started a military war from a neighboring country," Ayatollah Khamenei added.

"The 1980-1988 Sacred Defense proved a principle to the Iranian nation. That principle is that safeguarding the country and deterring the enemies’ tampering is achieved through resistance, not submission," the Leader stated.

"There was a time we asserted that all the world powers such as the West, NATO, etc. are fighting us. The war on Iran was an international war. This was our assertion those days. Today, they themselves publish the documents and proofs, and you can see their admissions and testimonies," the Supreme Leader continued.

The Leader, said the Iranian nation had a new message for the world during the era of the Islamic Revolution and the imperialist countries did not want anyone to hear that message.

But, the Supreme Leader continued, the Iranian nation responded by neutralizing all those goals and make the exact opposite happen.

Ayatollah Khamenei noted the enemies were angry because of the 1979 Islamic Revolution, which he said was not in line with the policies of Western and Eastern powers.

He recalled that all countries in that era were either pro-West or pro-East and no independent nation existed at the time.

“It was not at all tolerable for a country outside of this [bipolar] system to come and speak its mind. It was unbearable for them that a nation is not afraid of America,” Ayatollah Khamenei continued.

The Leader also noted that the revolution brought about events in the world that “perhaps we were not aware of all of its dimensions at that time, but they knew what had happened".

Iraq waged a war against Iran more than one and a half years after the victory of the 1979 Islamic Revolution, which toppled the US-backed Pahlavi regime. During the war, which became the longest armed conflict of the 20th century, Iraq was fully supported by the US and its allies, while the same countries denied Iran access to foreign arms.

Military officials say the military power of Iran is strong, extraordinary and deterrent despite enemy sanctions and pressures, and hail the country's defense sector for its remarkable developments in the recent decades. They stress the Iranian Armed Forces’ deterrent power dissuades the United States and Israel from implementing its threats against the country.