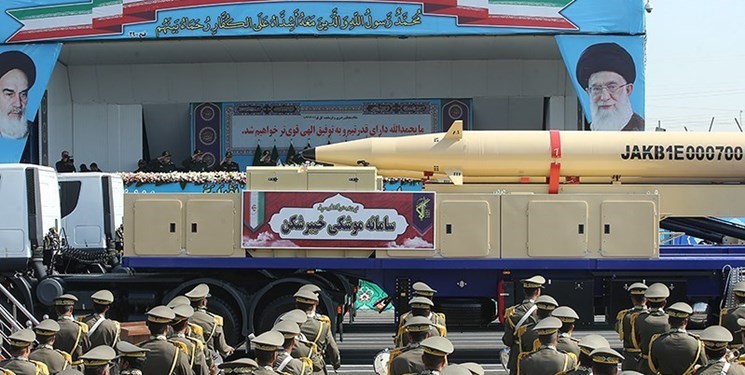 TEHRAN (FNA)- The Iranian Armed Forces unveiled new homegrown military products, including a new ballistic missile as well as radar and missile systems, during the military parades marking the start of the Holy Defense Week on the anniversary of the 1980-88 Iraq-imposed war.

On Thursday, the Iranian Armed Forces held military parades across the country and in the Persian Gulf waters to mark the Sacred Defense Week. Forces from the Iranian Army, the Islamic Revolution Guards Corps (IRGC), Police, Border Guards, and Basij are participating in the parades.

During the parade in Tehran, the Iranian Armed Forces unveiled a surface-to-surface ballistic missile, Rezvan, for the first time.

Rezvan is a liquid-fuel single-stage missile with a detachable warhead that has a range of up to 1,400 kilometers. It can be launched from a variety of fixed and mobile platforms.

IRGC Commander Major General Hossein Salami introduced the Rezvan Missile as the one capable of entering the atmosphere with a speed that is eight times higher than the speed of sound.

He noted it is a precision-guided and state-of-the-art missile with a medium ballistic range.

During the parades, a missile system, dubbed Khaybar Shekan, was also put on display.

The missile, which has been previously unveiled, has a range of 1,450 kilometers and enjoys high agility. It is capable of striking its designated targets with pinpoint accuracy.

Khaybar Shekan is reportedly among third-generation long-range missiles indigenously developed and manufactured by military experts at the IRGC’s Aerospace Division.

It uses solid propellants and is said to be capable of penetrating into missile shields with high maneuverability during its landing stage.

Aerospace Force of the IRGC has also unveiled for the first time a sample of its missiles dubbed “Sevvom-e Khordad”- in Persian means the third day of the third month of the Iranian calendar year- with air defense system and 200-km range.

Military officials say the military power of Iran is strong, extraordinary and deterrent despite enemy sanctions and pressures, and hail the country's defense sector for its remarkable developments in the recent decades. They stress the Iranian Armed Forces’ deterrent power dissuades the United States and Israel from implementing its threats against the country.