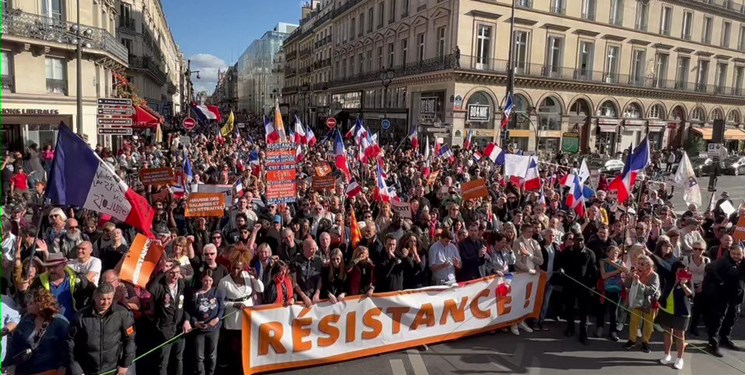 TEHRAN (FNA)- Thousands of protesters have gathered in Paris to call for an end to France’s membership in the US-led NATO, chanting "Let's get out of NATO".

The demonstrators also protested against the high costs of living, presstv reported.

They demanded that President Emmanuel Macron resign, calling on his government to stop supplying arms to Ukraine.

On Wednesday, French far-right leader Marine Le Pen stated that if she won the presidency, she would once again leave the military command of the US-led alliance.

Ever since the Ukrainian crisis began, causing a severe energy crisis across Europe, anti-NATO sentiments have been rising among the Europeans.

In France, petrol pumps have been running dry as worker’s strike continues in the refineries of the major French oil companies.

The strike staged by France’s hard-left CGT union at refineries of ExxonMobil and TotalEnergies was originally intended to last three days but it has now entered its 13th day.

"It is continuing everywhere," a CGT representative said, adding that there had been no contact from TotalEnergies since Saturday's call by the union for the company's bosses to start wage negotiations.

On Friday, riders faced the crunch as hundreds of meters long queues crawled out of petrol stations across the country, causing frustrations and long waits for commuters.

“We’ve been waiting for an hour,” said one motorist, whose car was already running on empty, adding, “The queue hasn’t moved at all. I don’t know what we are supposed to do.”

“The Government is doing its utmost to restore the situation to normal, as soon as possible,” Energy Minister Agnès Pannier-Runacher said in a statement.

Around 20.7 percent of service stations experienced difficulties on Saturday, compared with 19 percent the day before, according to the French energy ministry.

Out of the total six refineries, three are currently not operating, cutting the production by 60 percent equaling to 740,000 barrels of petrol a day, and affecting nearly one third of the petrol stations across France.

The workers who have staged a strike are demanding for a pay increase against a backdrop of a cost-of-living crisis and soaring profits in the energy industry.

In the second quarter of 2022, TotalEnergies recorded a profit of $5.7 billion compared with $2.2 million during the same period in 2021.

“Let’s not panic,” said Macron on Friday, as he called for calm on all sides. Yet even as the president appealed for an end to the strikes, he agreed that executives at Total should take into account the “legitimate salary demands” of its workers.