Martyr Soleimani’s Role in Realization of A Post-American Region 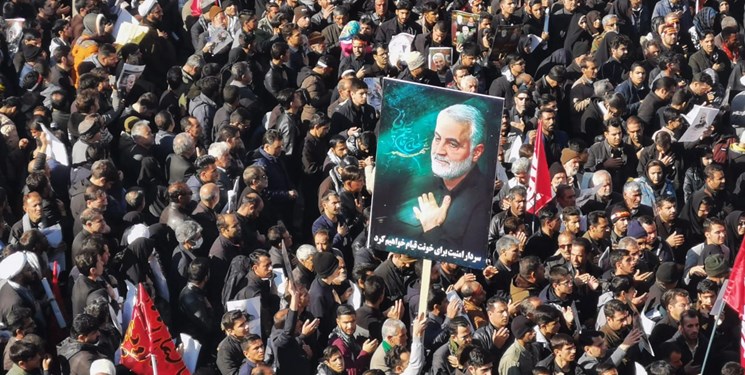 TEHRAN (FNA)- January is the month whose first days have become a symbol of the emergence of the post-American world. From the martyrdom of General Qasem Soleimani on January 3, 2020, to the US Congress takeover by protesters on January 6, 2021, all these January events have a clear message: The era of liberal democracy and American hegemony is over.

This collapse of hegemony which is especially evident in West Asia, is in reality the outcome of the heroic endeavors and actions of the Axis of Resistance and, above all, the endeavors and actions of Martyr Soleimani. In order to shed light on Martyr Soleimani’s role in bringing an end to US hegemony and defeating Western plots in the region, we must first address the issue of current US objectives in West Asia.

After the 9/11 attacks, the United States began to militarily occupy West Asia under the pretext of fighting terrorism. At that time, American officials and strategists like Zbigniew Brzezinski unveiled various plans and plots such as “The Greater Middle East” or “The New Middle East” plans. For example, during the 33-day Lebanon War in 2006, then-US Secretary of State Condoleezza Rice said in an important speech: “What we’re seeing here is, in a sense, the growing — the birth pangs of a new Middle East, and whatever we do, we have to be certain that we’re pushing forward to the new Middle East, not going back to the old Middle East.”

These remarks evidence the US government’s plans for West Asia. In fact, the US was trying to implement this project in order to first, bring a laissez-faire economic system to the countries of the region and turn them into a bloc revolving around Israel and, second, expand the model of liberal democracy into the countries of the region. Former US President George W. Bush proclaimed this in a 2003 speech after the fall of Saddam Hussein, saying: “Iraqi democracy will succeed, and that success will send forth the news from Damascus to Tehran that freedom can be the future of every nation. The establishment of a free Iraq at the heart of the Middle East will be a watershed event in the global democratic revolution.”

At the same time, then-US Vice President Dick Cheney announced in his speech at the Davos World Economic Forum that the US government was committed to “promoting democracy throughout the greater Middle East and beyond.”

Nonetheless, this project failed like other US government projects, despite its huge costs. Twenty years after the beginning of those wars, the current political situation in Iraq and Afghanistan attests to this reality. The wars, apart from costing the US economy trillions of dollars, led to many casualties in regional nations. According to a report by Brown University, more than 900,000 people have died in post-2001 US wars, with more than 70,000 civilians in Afghanistan and nearly 300,000 civilians in Iraq having been killed by these wars.

In the meantime, Western support for terrorist and takfiri groups in the region neatly completed this puzzle. Groups such as DAESH (ISIS) — which former US President Donald Trump admitted was created by the US government — tried to destabilize the region so that the US can pursue the strategy of creating a 30-year religious war in West Asia.

But what Western governments had never included in their calculations was Martyr Soleimani — a personality who disrupted their plans and plots and put an end to their destructive presence in the region.

The Lebanon War was the first serious confrontation between Martyr Soleimani and the Arrogant Front. He played a very important role in defeating the Zionist regime and its supporters in the 33-day war, thus bringing “The Greater Middle East” project to a deadlock.

Safauddin Tabaraian, translator of the book The Untold Stories of the 33-Day War, comments about the role of Martyr Soleimani in Hezbollah’s victory in the 33-Day War: “I heard from Sayyid Hassan Nasrallah himself that Haj Qasem’s role in our victory in the war was even greater than Imad Mughniyeh’s role.”

Martyr Soleimani also played a key role in equipping and strengthening the Resistance Front in Palestine. About this,  Secretary General of the Palestinian Islamic Jihad Ziyad al-Nakhalah said a few years ago: “The power and facilities that Gaza has achieved today are the results of the great efforts of Martyr Soleimani. General Soleimani’s strategic step began with sending rockets and weapons to the Gaza Strip, and this was like a miracle ... General Soleimani personally strived in this direction, traveled to many countries, and planned to transfer this military might [to Gaza].” Even today, many find it astonishing that the Gaza underground tunnels, which are approximately 360 kilometers long, was one of the strategies devised by Martyr Soleimani and Martyr Imad Mughniyeh.

Ultimately, leading the Axis of Resistance against the DAESH terrorist group was Martyr Soleimani’s main action against the schemes of the Arrogant Front. Martyr Soleimani and his companions uprooted this evil force and restored security and peace to regional nations.

Martyr Soleimani’s role in eliminating DAESH was so significant and pivotal that even American media outlets such as Newsweek, Business Insider, The Week and others acknowledged it many times over the years. Also, whenever some American officials tried to give themselves the credit  for the elimination of DAESH, they faced decisive rebuttals from international experts and professors on this issue, pointing to the efforts of Martyr Soleimani.

For instance, Prof. Arshin Adib-Moghaddam of University of London said in response to Trump’s attempts to give himself credit for destroying DAESH that it was Iran along with Russian air power that “dealt the decisive blows” to DAESH and Qasem Soleimani was the mastermind behind it.

In today’s West Asia, the decline of the US is palpable and openly spoken about based on the reality on the ground. This change and growth in regional countries and the people’s outlook is the result of the Resistance Front’s struggles against global colonialism and arrogance and, without a doubt, Martyr Soleimani was and will remain among the most prominent figures of the Resistance Movement.