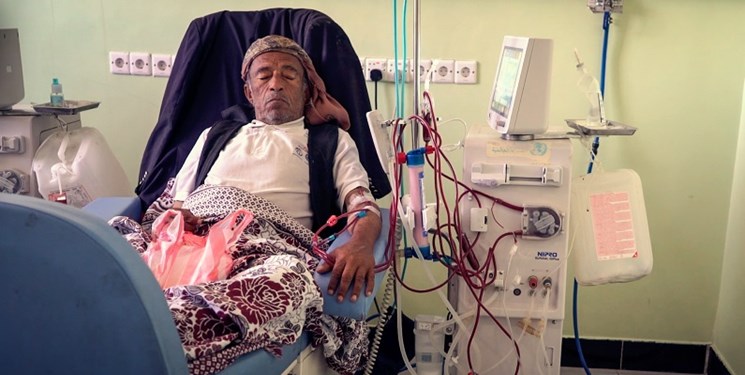 TEHRAN (FNA)- Yemen's Ministry of Health warned of a “human catastrophe” that threatens the lives of more than 5,000 patients with renal failure as a result of the years-long Saudi-led blockade against the impoverished war-torn country.

Ali Jahaf, National Salvation Government’s deputy health minister, made the remark at a press conference in the capital, Sana’a, late on Saturday as he raised the alarm about the depletion of the stock of dialysis drugs and medicine for Yemeni patients suffering from chronic kidney disease, Yemen’s Ansarollah news website reported.

“This is not the first conference and we have held more than one. We have been warning of a human catastrophe threatening the lives of thousands of dialysis patients in various governorates, but there is no response,” Jahaf added.

"We have addressed the United Nations and health organizations operating in Yemen that we need to provide sufficient drug stocks for dialysis sessions for the year 2023 as we need approximately 500,000 dialysis sessions every year without receiving a response despite lots of correspondence and meetings in this regard," he added.

Stressing that dialysis centers in Yemen are standing on the “verge of stopping”, Jahaf said the issue will “affect the lives of 5,000 patients with kidney failure who need dialysis sessions and drugs, and they may lose their lives if these solutions and medicine are not available urgently”.

The deputy health minister underscored the importance of opening Sana'a airport and the port of Hodeidah as they are vital outlets for medicine and food for millions of Yemenis in the besieged areas by the Saudi-led coalition aggression, adding, “In light of the imposed blockade, we are unable as a country to import vital medicine and save our patients”.

Jahaf went on to say that, "We are in urgent need within two weeks to provide dialysis sessions, and our stock has run out".

Anis Al-Asbahi, a spokesman for Yemen’s Ministry of Health, also called on international organizations to urgently provide dialysis sessions so that dialysis centers would continue to operate and save the lives of Yemeni patients.

Asbahi held the United Nations responsible for saving the lives of dialysis patients and responding to the basic requirements of the Yemeni people under the siege, stressing the need to open Sana'a airport and Hodeidah port.

Saudi Arabia, in collaboration with its Arab allies and with arms and logistics support from the US and other Western states, launched the devastating war on Yemen in March 2015.

The objective was to crush the Ansarullah resistance movement, which has been running state affairs in the absence of a functional government in Yemen, and reinstall the Riyadh-friendly regime of Abd Rabbuh Mansour Hadi.

While the Saudi-led coalition has failed to achieve any of its objectives, the war has killed hundreds of thousands of Yemenis and spawned the world’s worst humanitarian crisis.