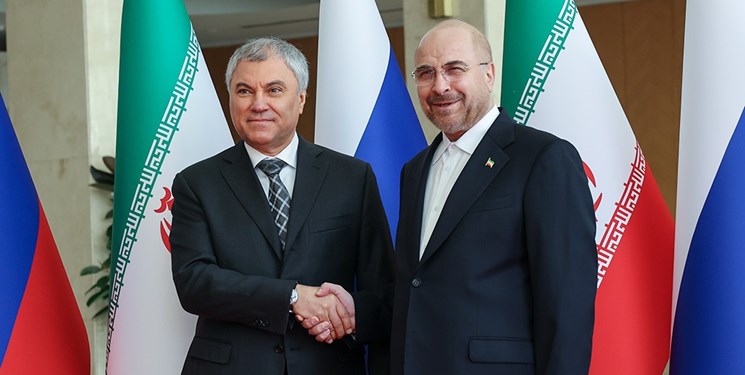 TEHRAN (FNA)- Iranian Parliament Speaker Mohammad Baqer Qalibaf emphasized the necessity for the implementation of the 25-year Tehran-Moscow cooperation document as soon as possible, saying that both sides officials believe the agreement is a major milestone in the bilateral and multilateral relations and cooperation.

Qalibaf made the remarks in a meeting with Chairman of the State Duma of the Russian Federation Vyacheslav Volodin, who arrived in Tehran on Sunday night, expressing satisfaction that the COVID-19 restrictions came to an end and both sides can hold the third meeting of a joint parliamentary committee.

The Iranian speaker pointed to the long time between the second and third meetings, noting that important developments occurred at regional and international levels in this period, so "Moscow and Tehran witnessed the expansion of interactions in various sectors".

"Both sides have reached the conclusion that mutual ties between Russia and Iran are of great importance," the senior lawmaker said, hoping that the parliaments of both countries can help speed up the strategic political and economic cooperation in 2023.

"Authorities in Russia and Iran are well aware that the bilateral, multilateral, national and regional developments are experiencing a turning point and that time is the most significant element in decision-making," he added.

Calling for focusing on the future, Qalibaf said that the 25-year strategic partnership plan should be implemented in the shortest time possible.

Volodin, for his part, stated that Iran-Russia ties improved in a positive path and friendly relations between heads of state of both sides indicate the appropriate mutual ties of the two nations.

The Russian Duma makes all-out efforts to pave the way for implementation of the decisions made by the joint parliamentary commission, he added, expressing hope that the third meeting will reach good results to guarantee the interests of both countries, and create new structures to deepen bilateral ties.

The senior MP further underscored that he is hopeful the strategic partnership plan would be inspected by the presidents of both countries in the near future, arguing that the contract is not only a strategic accord but it is a foundation to develop cooperation in all sectors.

On challenges and threats ahead of both states, Volodin underlined that Iran and Russia have been facing challenges for a long period and that the threats cannot hinder the development of relations between Tehran and Moscow.

"The main objective of sanctions is to maintain the United States' hegemony in the world, but we (Iran and Russia) defend our own national sovereignty and determine our own fate and policies," according to the Russian official.

He referred to the 20-year comprehensive cooperation agreement between the two countries, stating that the agreement does not only include new relations but will pave the ground for developing cooperation.

The third meeting of the joint parliamentary commission is scheduled to address energy, transportation, agriculture, banking, security and regional cooperation.

Since Tehran and Moscow enjoy common interests in economic, military and security affairs as well as friendly relationship pursue common policies on regional and international developments especially when it comes to taking stances in the face of the United States’ unilateral and interventionist strategies.

Iranian officials say Tehran and Moscow, both subjected to tough economic sanctions by the Western countries, are determined to deepen their economic cooperation, adding that there are great capacities for increasing the volume of bilateral trade.

Several officials in Tehran and Moscow have repeatedly accused the United States of using the dollar as an instrument to wage economic and political war. Iranian and Russian officials have touched on the policy to replace the dollar with national currencies, and use other currencies in place of the dollar, and stress that the dollar should be gradually ditched from global transactions.

Iran and Russia have recently grown exchane of visits by officials to speed up expansion of relations in recent months.