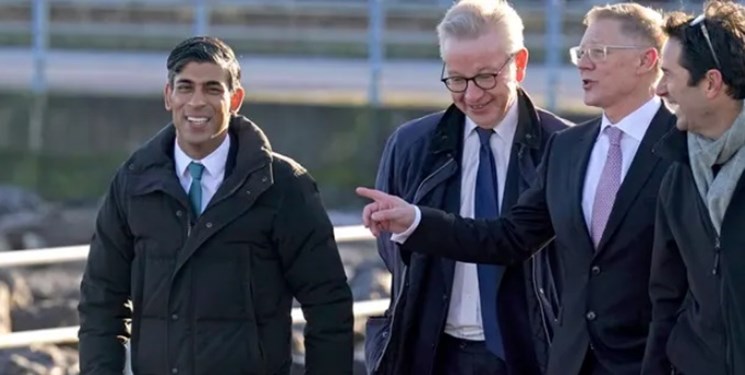 TEHRAN (FNA)- Councils are being forced to freeze levelling up projects or find millions from their own squeezed budgets to complete works because of soaring costs which have exceeded government grants.

At least £500mln has been lost from projects funded by different government levelling up schemes due to inflation and rising costs, The Guardian revealed.

The true losses are likely to be even higher because for some funds the government will pay out on the delivery phase, which could be several years later.

The levelling up secretary, Michael Gove, will address the Convention for the North on Wednesday amid criticism of the latest round of levelling up funding from some MPs, including anger that London was getting more than Yorkshire and North-East England. The government has argued that per capita, the North and the Midlands have benefited more.

However, the number of projects funded by Whitehall-allocated schemes are now under threat because of the soaring costs – which have also meant councils taking on additional risk.

New leisure buildings, high street regeneration, museums and public spaces have been hit by rising costs, including in Calderdale, Preston and Greenock.

Analysis of data from the House of Commons Library shows that, based on the latest projections from the Office for Budget Responsibility (OBR) at the time of the autumn statement, £576mln has been lost from different levelling up funds because of inflation.

The analysis of the overall real-terms loss was done by Labour, which found there was about £137mln lost from the levelling up fund from round one, £196mln from the UK shared prosperity fund, £172mln from the towns fund, £60mln from the future high streets fund and £9mln from the community renewal fund.

The analysis looked at inflation projections taken from the OBR’s autumn statement analysis, as well as looking at the real-terms value of the levelling up fund from the first round of awards based on inflation in the construction industry, given those projects are overwhelmingly infrastructure-based.

In Halifax, a new swimming pool and leisure centre are on hold for at least a year because of rising costs. Calderdale council received £12.2mln for the project in October 2021 but costs could rise by a further £4mln according to local reports.

Halifax’s Labour MP Holly Lynch said inflation was having a chilling effect on the first round of projects.

“Too many of its first-round projects have had to be paused or shelved because of spiralling costs,” she said.

“The government wants the credit for these projects yet the economic landscape they have created is making them impossible to deliver,” she added.

The council said the project was unsustainable in its current form because of multiple budget pressures after years of austerity and the impact of the pandemic. It said it forecast that it would need to make tens of millions of pounds more in budget savings until 2026 because of inflation.

Analysis has also been done by the Institute for Public Policy Research, which found £1 in every £13 could be lost to inflation if the government did not act to protect investment.

Jack Shaw, a senior research fellow at IPPR North, said, “Projected spend has consistently fallen short, meaning the true cost of inflation is likely much higher, and further delays will only increase the pain facing local authorities as the impact of inflation accumulates.”

In many cases, projects are going ahead but will need increased funding from local councils, which are already under budget strain. In Preston, the council has been hit by spiralling costs for its town centre redevelopment, for which it received more than £20mln in 2019.

Some of the related projects now had “significant challenges with cost inflation”, said Preston City Council’s Chief Executive, Adrian Phillips. In one scheme, the Grade II-listed Amounderness House regeneration, the council has had to use borrowing to plug the funding gap because otherwise it would not be able to proceed.

In another scheme backed by the towns fund, the council has had to significantly reduce the work and go back to the government to seek consent.

“The costs were so high and we had no flexibility so we are just reducing the area we can benefit,” Phillips said.

The council has also had to find more than £1mln extra for the refurbishment of the Harris museum, where scaffolding costs alone have risen to more than £1mln, meaning potential delays to other capital projects.

Phillips is among many local authority leaders who have criticised the approach of bidding for central funding posts.

“Funding from government is always welcome but you have to enter numerous competitive bidding rounds, they are time-consuming and costly for very limited funds,” he said.

“There are also ludicrous delivery timescales, set nominally by the Treasury, that are not optimal for bringing in partnerships. If it has to be spent by March 2025, for a major capital programme [that] is not flexible enough,” he added.

Preston was also successful in the latest round of levelling up funding bids, gaining £20mln to regenerate parks.

“That is fraught with challenge in terms of cost inflation,” he said.

“The government have made clear you cannot go back for more. At times you do have to downscale and then go back for consent. It’s an enormously stressful process and the worst thing is when you promise something and are not able to deliver all of it,” he added.

In other areas, there have been warnings from those who won funding in the latest round that they are already facing budget pressures. Councillors in Greenock, Inverclyde, said their costs had already soared since making their successful bid.

The council was awarded £20mln to demolish and reroute the A78 dual carriageway to transform Greenock town centre, including new public squares and green spaces. But the council has said it is likely to need another £2mln to deliver everything.

The Inverclyde Council Leader, Stephen McCabe, from Scottish Labour, told the Greenock Telegraph he was delighted with the bid’s success, but added, “Inflation will already have eaten away at the funding amount we bid for, so our project team will need to assess how this might impact on the scope of the project and whether additional funding will be needed to deliver the full plan as envisaged.”

Labour has said it would end the competitive bidding process by radically increasing devolved powers – and said the Conservatives were to blame for soaring inflation.

The shadow levelling up secretary, Lisa Nandy, said, “As a result of the Tories crashing the economy and pushing UK inflation to nearly the highest rate in the G7, vital projects have been delayed and now many face being downsized or scrapped altogether."

“This is symptomatic of a broken system where communities are forced to go cap-in-hand to Whitehall for small pots of money with strings attached. It leaves them especially exposed to economic shocks – not least those brought on by Tory governments,” she added.

A spokesperson for the Department of Housing, Levelling Up and Communities said, “We are closely monitoring the impact of inflation on projects and working closely with councils and delivery partners to ensure public services are protected and levelling up projects delivered.”

The department said it had set up a project adjustment process to work on the scope and phase of projects to mitigate delivery problems. It said £65mln of support was being made available to successful applicants in the form of commercial advisers, grants to buy local support, and a training package.